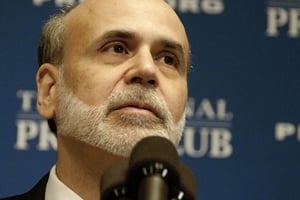 It’s no secret that hackers have an intense interest in gaining access to financial institutions’ networks and data. A successful cyberattack can yield a big payday for hackers. In one particularly striking example, a network of cybercriminals stole up to $1 billion from banks around the world, as Kaspersky discovered.

This incident was not a fluke. As former Federal Reserve chairman Ben Bernanke recently emphasized, cybersecurity remains a critical vulnerability throughout the financial sector. To improve this state of affairs, banks and other financial institutions must embrace comprehensive reforms to truly shore up their defenses against increasingly sophisticated, determined cyberattackers.

Bernanke delivered his remarks in Hong Kong before a gathering of financial professionals, as Finance Asia reported. Bernanke highlighted the danger that hackers pose when it comes to banks’ international networks, which are often vulnerable to targeted, well-designed cyberattacks.

“It is one of the security risks that I would place very near the top of the things that the financial sector needs to work on,” said Bernanke, according to the source.

The speaker pointed out that cyberattacks directed against the Federal Reserve during his tenure were quite common, and a number were moderately successful, Finance Asia noted.

“The awareness is there, people understand how serious it is, but it’s a very difficult challenge because they’re very clever and it keeps changing and there are many points of entry,” Bernanke said, the source reported. “The financial system is integrating … across borders so there are always going to be weak spots.”

But while many would agree with the need for greater cybersecurity spending in this sector, it is far less clear what form these investments should take. Obviously, technologies can and should play an important role in this area, as strong firewalls, anti-malware systems and other advanced tools have the ability to ward off many cyberattacks, including the more sophisticated, patient hacking efforts.

However, such measures only go so far. To truly protect themselves, banks must also focus heavily on security awareness among employees throughout their organizations. After all, the $1 billion bank heist mentioned above was largely the result of phishing attacks which circumvented automated cyberdefenses. By investing in security awareness training, including phishing simulations, banks can help their employees to resist these types of cyberattacks, significantly improving their overall cyberdefenses as a result.

NewerWebinar: The Advantages and Benefits of Online Training for your Information Security Awareness Program
OlderFirms need to focus more on employees to prevent data breaches