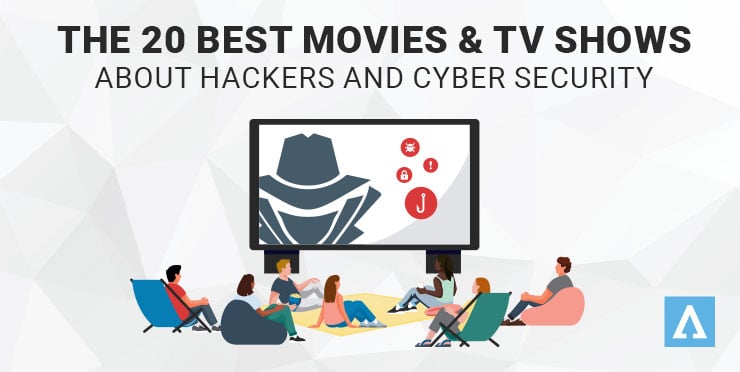 For nearly a half-century, cyber security, cyber attacks, and the criminals who perpetrate those acts have been a topic of fascination in Hollywood. With increased tech reliance and adoption beginning at the turn of the 21st century, the appetite for and popularity of these types of movies and TV shows has exploded worldwide.

This collection of titles is perfect for anyone looking to delve into the cinematic world of information security or enjoy an exciting bit of escapism. Every movie and TV show on this list either explicitly centers around cyber security, contains more than a few scenes focusing on the subject, or embodies the spirit of why protecting sensitive data is of the utmost importance.

The similarities between the characters and scenarios depicted in these stories, often drawn from real-world events, may surprise you.

Gene Hackman plays a surveillance expert who gets in over his head when a routine job spying on a couple quickly spirals into something far more dangerous. Widely considered Francis Ford Coppola’s best non-Godfather film, it’s a taut exploration of how a lack of data (or physical office) security can hold lives in the balance.

In one of the earliest movies centering around hacking, a computer engineer is transported to a virtual world after learning an executive has plagiarized his work. Once there, he’s forced to compete in increasingly war-like games, with his only hope for escape is – wait for it – a security program! A sequel, Tron: Legacy, was released in 2010.

A pre-Ferris Bueller Matthew Broderick plays David, a high school-aged computer whiz who accidentally accesses a military supercomputer programmed to simulate … well, precisely what the title suggests. This film was one of the first smash hits with a hacker as the central character, grossing $125 million worldwide against a $12 million budget.

Robert Redford stars as Martin Bishop, the head of a security specialists team that performs ethical hacking for large organizations. However, Bishop’s got a few skeletons in his closet, and when NSA officers task him with retrieving a black box item in exchange for a clean slate, it’s an offer he can’t pass up. Initially conceived by Lawrence Lasker and Walter Parkes, the writing duo behind WarGames.

Based on a manga of the same name by Masamune Shirow, this neo-noir animated thriller has become one of the most influential cyberpunk entertainments in popular culture. Highlights include a plot centered around the hunt for a hacker known as the Puppet Master and philosophical questions about an individual’s role in a hyper-tech-reliant world.

Arguably the most 90s pick on this list, Hackers is an energetic romp of a thriller pitting a band of school-aged hackers against a corporate extortionist seeking a big payday. It’s also a stark reminder of how new and foreign the internet felt to the average consumer in 1995, with scenes echoing The Hacker Manifesto, an essay published nearly a decade earlier.

Sandra Bullock stars as a systems analyst who works remotely in California and becomes embroiled in a deadly conspiracy after receiving a mysterious floppy disk that backdoors into a well-known computer security system. The plot includes numerous cyber security topics, including identity theft, spoofing, and early examples of cyber terrorism.

Before real-life leaked documents (paging Edward Snowden) revealed the shocking extent of computerized surveillance, Enemy of the State posits how devastating this unprecedented and unchecked access to consumer data can be. Unsurprisingly, then-NSA Director Gen. Michael Hayden was “appalled” at the film’s depiction of the agency.

A work-life satire that takes place at a late-90s software company, Office Space earns a place on this list due mainly to the caper at its center. Three disgruntled employees decide to get a little revenge against their corporate overlords by infecting the accounting system with a virus and making off with hundreds of thousands of dollars. Proof positive that technological safeguards can’t guarantee information security.

No list of fictional movies or TV shows that touch the topic of cyber security is complete with The Matrix. It’s a well-known pop culture touchstone that continues to influence and inspire tech odysseys in art. The film’s themes have only become more relatable with time, especially with advances in VR technology pushing us closer to the reality depicted in this classic.

A notorious hacker (Hugh Jackman) is coerced into cracking a secure Defense Department server. After the attack is successful, he’s asked to program a multi-headed worm for individuals purporting to be government agents, though nothing is as it seems. Come for the manic techno thrills. Stay for the wacky editing and even wackier John Travolta facial hair.

If you think current AI and machine learning efficiency is too invasive, what if law enforcement could arrest and incarcerate criminals before committing a crime? It’s the intriguing premise of this high-octane Spielberg-Cruise actioner, which asks just as many philosophical questions about technology integration and habit monitoring as it answers.

Based on the British graphic novel of the same name, this adaptation updates the narrative to include commentary on government surveillance and media manipulation. However, the iconic Guy Fawkes mask has been the story’s lasting contribution to cyber security culture, now an image commonly associated with the hacking network Anonymous.

In the fourth installment in the popular action franchise, Bruce Willis returns as NYPD detective John McClane. His mission: To stop a cyber terrorist targeting government and private sector systems as part of a plot to disable critical pieces of United States infrastructure. Justin Long brings a comedic element as another hacker who acts as McClane’s tech-literate sidekick.

One of the most respected movies of the 21st century, David Fincher’s exploration into Facebook’s origins and rise to prominence is as unsettling as it is darkly funny. The direct link to cyber security involves Facebook’s precursor Facemash, which Zuckerberg created by hacking into Harvard databases to obtain photos of female students for the “hot or not” rating site.

Directed by Bill Condon of Chicago fame, this film is a fictionalized account of the founding and fallout of WikiLeaks, a website dedicated to leaking classified information while protecting anonymized sources. Though allegedly embellished in terms of historical accuracy, this film showcases how information security (or lack thereof) can be easily manipulated for personal or political gain.

In early 2015, IGN reviewer Chris Tilly described this movie as “essential viewing for anyone with even a passing interest in where technology is taking us.” With a search engine coder serving as the protagonist and audience proxy, the story asks pointed questions about artificial intelligence, the dangers inherent in its development, and the security issues that may arise when we can no longer distinguish humans from machines.

Before his Oscar-winning turn as Freddie Mercury, Rami Malek was primarily known for portraying cyber security engineer and hacker Elliott Alderson on Mr. Robot. The show’s title refers to the anarchist who recruits Alderson into a hacktivist collective that wants to cancel consumer debt by encrypting large swaths of corporate data.

As with The Fifth Estate, a list like this would be incomplete without a mention of the Oliver Stone-directed account of how and why Edward Snowden leaked classified NSA information. However, unlike the WikiLeaks dramatization, Stone actually met with Snowden several times and, for security reasons, supposedly had to write portions of the script on a laptop without internet access.

Arguably the most epic and intense entry on this list, HBO’s reimagining of the 70s cult classic is an examination of cyber security woes as a vivid sci-fi-western hybrid. Besides the general topic of AI regulation, which has been a recurring theme over several seasons, specific plot points hinge on insider threats, malware, and vulnerabilities inherent in an Internet of Things setup.

Learn more and share crucial information about phishing, social engineering, and other cyber threats by visiting the Cyber Security Hub.

ACCESS THE HUB
NewerWhat is Metaverse Cyber Security and How Does it Work?
OlderWhat is a Tailgating Attack?