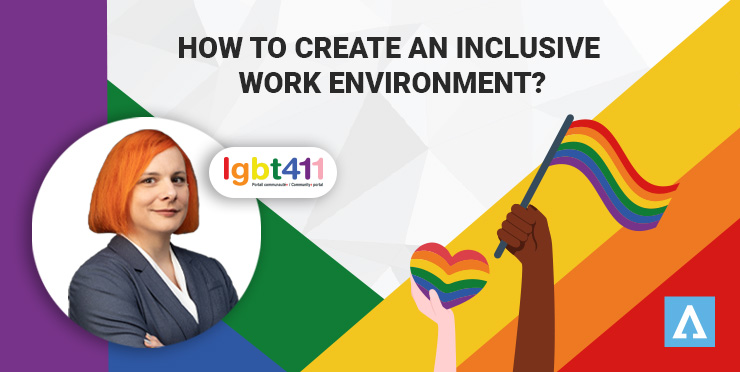 The LGBT+ community will be honored during the Pride Parade on Sunday, August 7, in Montreal. Because inclusion and diversity are values dear to Terranova Security, this is the perfect opportunity to open the discussion on the issues of inequalities encountered by this community in the workplace.

A necessary conversation according to Pride at Work Canada, 62% of LGBT Canadians who responded to a survey on diversity and inclusion said they have experienced or witnessed discrimination at work because of their sexual orientation or gender identity. Discrimination can take many forms, from jokes to keeping a distance to rejection.

To shed light on these issues and to provide solutions, Terranova Security has invited Sabrina Morin, team leader, senior web developer, and founder of the lgbt411 organization, to speak. She agreed to talk to us about her experience and to offer her thoughts and solutions so that everyone can, at their own level, create an accessible and open work environment.

Terranova Security: How did your involvement with the LGBT+ community begin?

Sabrina M: A few years ago, I began a transition, and I noticed that, as I progressed in my steps, many people asked for my help to begin a transition in their turn. Without really meaning to, I became a reference for my friends, which led to the creation of lgbt411.

Concretely, lgbt411 is an online directory connecting hundreds of thousands of community members and their allies to encourage diversity and inclusion worldwide. The organization will soon celebrate its first year of creation and what I hope in the long run is to

What are the issues faced at work by the LGBT+ community?

Some problems are related to specific groups. One of the problems encountered by trans people in the workplace is misgendering, which is the act of incorrectly referring to a person by a gender other than the one they identify with.

Another issue faced by non-binary people, for example, is being identified by pronouns such as he, she, or Mr., Ms.

How do you create an inclusive work environment?

SM: In general, the first piece of advice I would give to companies is not to pay extra attention to people from the LGBT+ community. That’s what I liked when I started at Terranova Security. We just want to be accepted and work under the same conditions as everyone else.

In terms of misgendering, the company and its employees must be responsive to everyone’s naming preferences. With trans people specifically, it is essential to use the chosen name and the correct pronouns significantly when the official name has not yet been administratively changed. Overall, gender-neutral language dramatically aids in the inclusion of community members, especially those who identify as non-binary.

Finally, training is the best way to foster inclusion and diversity in the workplace. Several organizations, such as JAG, offer in-house training to enable employees to become allies of the LGBT+ community. The main objective of these workshops is to make participants aware of the issues faced by a person of emotional, sexual, and/or gender diversity and the importance of preventing “micro-aggressions” (phrases, gestures, etc.).

What are you planning to do during Pride Week in early August?

SM: I will have a booth representing lgbt411 on Friday, August 5 at the Community Days and Saturday, August 6 at the Montreal CF Pride game at Saputo Stadium. On August 7, our group will be part of the parade for the first time. This day will offer excellent visibility, with 12,000 people in the parade and over 300,000 spectators.

Becoming informed is essential to understanding the reality and issues that people from the LGBT+ community are experiencing. The events surrounding the Pride Parade during the first week of August are great times to discuss and connect with the community.

Find all the information about the festivities on the Montreal Pride Festival website.

NewerWhat is HIPAA? All the Compliance Information You Need to Know
Older5 Ways to Be Prepared for QR Code Scams